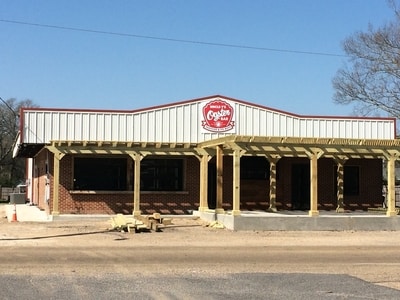 With decades of history behind the building itself, new owners Anthony and Lexi Hebert have turned Uncle T's Oyster Bar into something special all while keeping that timeless history alive. The original, all-brick building was built in the late 1950s by Lexi's grandfather, J. Warren Landry. It not only housed the Scott Post Office but within the 2,500 square feet were also a laundromat and washateria. In the 1960s, when the Scott Post Office moved to a different location, Cue Time Bar moved in. Cue Time, by namesake, was mainly a billiards room and was a well-known place where important meetings were held among business owners, politicians, and other prominent members of the Scott community. Situated along the train tracks within the art district, the building has become a pillar of the town of Scott and a landmark recognized by locals and visitors.

In January of 2016, Anthony and Lexi took over and renovations began. With their vision and planning, a 1,800 square foot extension was added to make room for the boiling house/oyster bar while extensive improvements were made to the front restaurant/bar area.
Keeping that historic feel alive, reclaimed wood from a 100-year-old barn on the nearby "Old Martin Farm" has been uniquely displayed on the ceiling and walls and even helps divide the family restaurant from the bar area. Along with the history, Anthony and Lexi have added their own style with a modern, yet classic, twist. An amazing 26-foot custom bar runs along one of the walls and ends at one of the most appetizing views in the whole restaurant, an oyster grilling room with a window to view how Uncle T's grills these local beauties.

With TVs all around the bar and two retractable garage doors for an open-air atmosphere, Uncle T's will quickly become a favorite spot for every game day for you and all of your friends. The inside of the building isn't the only part to get a facelift. In front, a beautiful pergola was built, and outside tables have been added for dining on those beautiful Louisiana days and nights. In back, an extended parking lot has been added to ensure that customers can come and go with ease.

Come join us for boiled seafood, a variety of poboys on local French bread, salads, wraps, and, of course, oysters just the way you like them!